Cognitive distortions can be called as methods where our mind convinces us for something which is not true, but harms our mental health. This blog explains some examples of thought distortions that therapists and counselors have experienced during cognitive behavioral therapy. Such thoughts induce anxiety, depression, addiction and mood disorders and sink one into negative feelings.

The best selling book, ‘The Feeling Good Handbook’, by David Burns has a comprehensive list of 10 forms of twisted thinking or thought distortions. He has also explained each cognitive thinking error with hypothetical examples and why such patterns lead to negative behavior.

For example, ‘I am the unluckiest person in the world’, ‘I am a complete loser’ or ‘Anything new would only hamper my growth’ could automatically replace the balanced thinking pattern. Let us now understand each cognitive distortion pattern using examples from the same book.

What Are Types Of Distorted Thinking Or Cognitive Distortions? 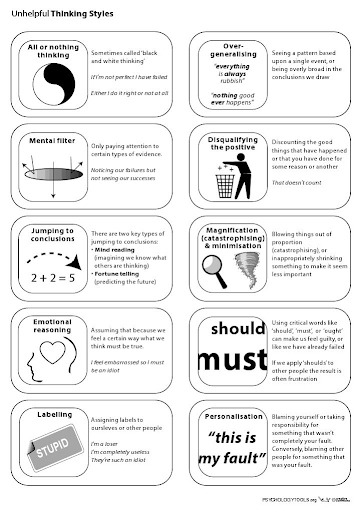 All or nothing or polarized thinking make things look either black or white. Things look absolute in this pattern and no middle ground could be seen in this situation. For example, a person realizes that he is not able to get sober. Now instead of realizing the problem and resolving it, he consumes more alcohol thinking that the situation is already blown off.

Someone who uses ‘always’ or ‘never’ words in their sentences frequently happens to overgeneralize after keeping a single event or coincidence as a benchmark. Any unpleasant event becomes the part of their never ending defeat and the person is stuck inside the cycle. For example, someone finds out that three is their lucky number through a series of coincidences, they apply the same number in every possible situation despite losing the game.

Mental filtering is opposite to overgeneralization but poses negative outcomes. It makes a person focus on one single event so exclusively that they keep everything aside. For example, someone who filters out all the good social gatherings without intoxicants still wants to consume intoxicants because in one gathering, he felt bored by his company. This irrational thought pattern can let them slip into toxicity once again.

Jumping to conclusions could be seen in two different ways:

For example, a fortune teller says that you won’t be able to survive without alcohol but in reality, the listener worked hard and stayed away from alcohol by own will-power.

It is highlighting, magnifying or catastrophizing the problems or shortcomings while ignoring the desirable qualities. For example, the person who wants to get rid of pain through medications will try to exaggerate the pain so that they can consume medicines. This cognitive distortion can lead to relapse into addictive behavior.

Based on emotions, the person with cognitive distortions try to judge oneself in particular instances. For example, a girl feels that she is worthless and cannot afford to look good and starts binge eating, only to make matters worse.

Sometimes should statements are strong enough to send a person into anxiety and panic as they look like ironclad rules while creating boundaries. Making own rules and then breaking them turns a person guilty and falls in one’s own eyes. For example, a girl has become shopaholic and spends excessive money on shopping because she should live up to her standards.

This cognitive thinking error involves an individual judging about oneself or someone else for their behavior rather than studying the depth of reasoning behind. For example, a girl labels her misfit for the society and keeps herself distant from everyone else. It may also lead her to fall for substance abuse.

Another irrational thought pattern makes a human being pressuring their views on other people and claiming they are absolutely correct in their place. Being wrong is simply unthinkable to them and they can go any extent to pose themselves right. For example, a husband telling her wife that he doesn’t care about what she says as he is anyway right.

In this type of cognitive distortion behavior, a person expects other people to change their behavior in order to suit themselves. It mostly happens to turn relationships into mess as expectations put the other partner into pressure. For example, a girlfriend wants her boyfriend to look perfect in every possible way and change things that she doesn’t like.

« Your Top Considerations When Selecting the Ideal Accountant: What to Remember

How To Design A Business Card: 10 Top Tips