How Do You Pick a Great Emerald Cut Diamond Ring?

by ruchir
in Fashion, Lifestyle
0

What is Emerald Cut Diamond?

Emerald cut diamonds is a distinctive and elegant class of diamond cuts. Unlike many other brilliant cuts, an emerald cut diamond is called a step cut. Its facets aren’t the traditional comet or star shaped ones found in other loose diamonds, rather the emerald cut has little rectangular facets that look like stairs or steps.

The facets of this ladder cut are certainly bright, but they are more subdued. It is no exaggeration to say that the charm of the emerald cut lies in its long and graceful body. The appeal of an emerald cut diamond ring is that it appears larger than other stones. This means that they are ideal for engagement rings that stand out.

How to Discover an Emerald Cut Diamond?

Emerald cut diamonds are best suited for high clarity as to the large table and the lack of brilliant cut makes it difficult to hide inclusions. However, they can handle color better than other forms of fancy. Therefore, choosing a low color emerald diamond is not necessarily a problem. And what’s better, this combination of attributes can make your budget go further.

While higher clarity diamonds can be more expensive, going a lower color with an emerald cut diamond can save you money (without sacrificing looks).

The Popularity of Emerald Cut Diamonds 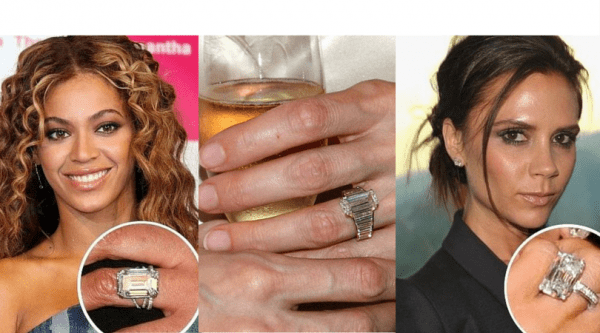 In recent years, Emerald Cut Diamond Engagement Rings have become increasingly popular. They are very sophisticated and this diamond cut is often thought of as very modern. The origins of the emerald cut diamond date back hundreds of years. Its diamond cut is one of the oldest.

The origins of the emerald cut style can be traced back to the table cut, which was popular in the 16th century.

Emerald cut has become more and more popular over time because it prevents the stone from chipping by reducing the pressure when cutting it. The term “emerald cut” was not officially used until the 1920s. At that time, emerald cuts were very popular. With the rise of Art Deco, the cut received even more attention.

Clean lines and symmetry were favored, and many people chose emerald-cut diamond jewelry to match. Since then, emerald cut engagement rings have been a favorite of women all over the world. Emerald cut diamonds are often thought to date back to the 1920s, but they have been around since the late Middle Ages. This was before diamonds were used in jewelry.

People began to “improve” diamonds that nature had designed. By polishing the faces of the octahedral crystal, they were able to create uniform facets with fewer streaks. This was called a point cut and was practiced until the middle of the 14th century.

In the 15th century, the tip cutting technique was greatly perfected. The table cut, in which less than half and octahedron is cut, became widespread. Around this time, some table-cut diamonds also had a spoon, and the importance of the spoon was also recognized.

Shortly after, four corner facets were created. It is also called “old eight-cut” and “old single-cut”. These cups had no shine or fire, they were just hard. The cut diamonds on the table were black in people’s eyes, just like in the paintings of the time. This is why colored gems (such as sapphires and rubies) were so popular in ancient times. In the 1940s, with the development of diamond saws and other tools, emerald cutting became more popular, allowing more cuts to be made. The emerald cut replaced the step cut because jewelers and diamond cutters realized that they could add “more fire” to a diamond by using the emerald cut.

The Different Between Asscher Cut and Emerald Cut 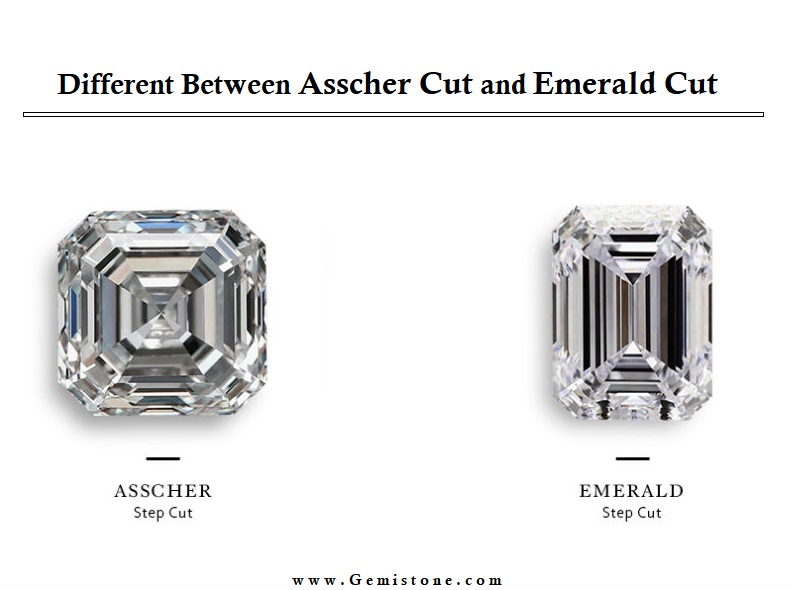 Both the Asscher cut and the Emerald is known for their vintage brilliance and stepped facets. For those unfamiliar with the diamond world, it can be difficult to distinguish between the two forms. Many people think that an Asscher cut is simply a square emerald cut, but it is not. The easiest way to tell them apart is by the shape of the loose diamond. An emerald cut diamond has an upright, rectangular shape.

An Asscher cut is square or nearly square when the aspect ratio is 1.00 or 1.06. The emerald cut has an aspect ratio between 1.50 and 1.75 and has a more slender and elongated shape. These diamonds are also cut in different ways. The Asscher cut doesn’t have as wide an opening on the chart as the Emerald cut.

The width and openness of this table give the Emerald Cut its classic and elegant look. With the emerald cut, it is very easy to see the flaws and inclusions. For this reason, the clarity of an emerald cut should always be high.

The Asscher cut is known for its many facets, but there is also the step cut, which has an “X” pattern when viewed from above.

Emerald cut diamonds look great in a wide variety of settings. However, two of the most popular settings are the solo setting and the glowing halo setting. An emerald cut solitaire engagement ring showcases the sophistication of the center stone. But an emerald and diamond cut ring can also be a sophisticates and understated option for the minimalist bride.

But while emerald cut solitaire rings and emerald diamond halo rings are common, they’re not the only beautiful options.

Emeralds are a Fantastic Choice For Engagement Rings. 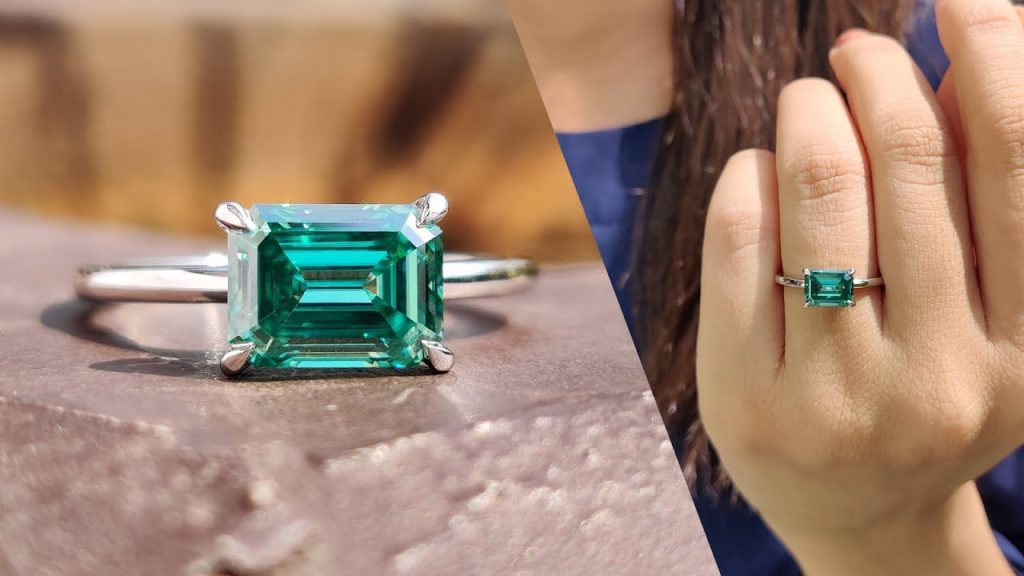 Emeralds are beautiful and long-lasting, which makes them great for engagement rings. Engagement rings from Gemistone Jewelers will be the iconic item that you should purchase for your special day. They are quite famous with people who love green. Many celebrities like Halle Berry, Jacqueline Kennedy, Victoria Beckham, and Olivia Wilde have worn emerald engagement rings.

Emerald rings, on the other hand, are not recommends for persons who are too active or who frequently bump into things. Green diamonds or green sapphires, which are more durable than emeralds, should be selected instead. If you want to buy green gemstone emerald ring for men, visit our leading & trustable online webshop. Others, you will find most emeralds are cut in their iconic emerald shape, but they also appear in a pear or oval cuts. Lab-created diamonds can be cut into multiple different shapes.

We hope that now that you know more about green emerald diamonds, emerald black diamonds you will make a better informed decision. If you have any further questions, feel free to contact us or mail us at info@gemistone.com. And also go on Google search at www.gemistone.com; and visit our online jeweler’s store!!

When it comes to creating an idyllic outdoor living space, the possibilities are endless. Whether you enjoy chilling out...

Beautyforever; the best wigs ever colored wigs and human hair wigs in 2022

Looking for a change? Or maybe you just want to try something new? Whatever the reason, wigs are a...

Who does not love shopping? Luckily, Alabama is home to some fantastic shopping points. The state has impressive shopping...

What should you look for when buying quality cheap human hair wig?

Wigs solve many hair problems, including alopecia, damaged hairline, and others. Even if you don't suffer from any of...

What Are The Advantages and Uses of Bulk SMS in Jaipur?